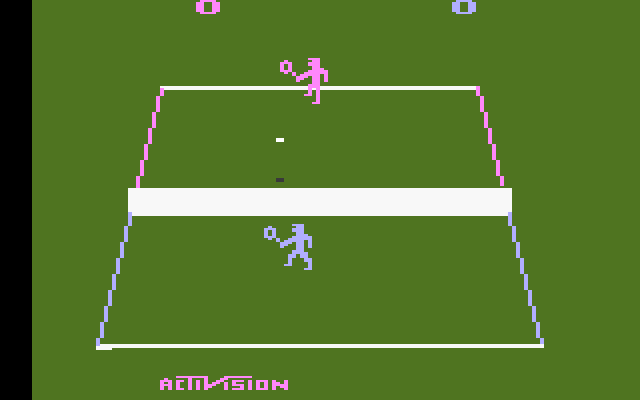 The minimum score required in Tennis by Activision for the Atari 2600 to earn a patch was: Beat the computer opponent in a set. The best advice in Tennis is to read the manual, so that you know all of the nuances of the game. The manual gives some really good tips. Make sure both difficulty switches are set to B. It is nearly impossible to beat the computer if your left difficulty switch is set to A. Activision Tennis was designed by Alan Miller.

1 & 3 you will always be the left joystick – orange player while the computer is blue. The controls are the usual left, right, up, and down. The up and down in this game brings your closer to or further from the net. While you are in serving mode your movements are limited to just left and right. The red button is to serve the ball. The difficulty switches in this game make your serves and return volleys vary. While in the “A” difficulty position, your serving shots and volleys are limited in the width of angles, while in the “B” difficulty position you’ll have a much wider area of sharply angled shots. B makes it much easier to win against the computer opponent.

You begin the game by pressing the reset button. The orange player will always be the first to serve the ball. To serve the ball you can move your player back and forth till you feel comfortable with that positioning and then press the button to serve the ball. To return the serve just position your player near the ball, you will return the serve automatically. No button pressing is ever necessary except while serving. The placement of the racket either to the right or left side of the ball helps in the placement of where you will hit the ball to angle the return volleys.

Remember you want to outwit your opponent with some fake-out moves and sharp angled return volleys that will be out of his reach to attempt a return. The scoring in this game is the same as in real tennis: 15-30-40, “deuce” at 40-all, and “ad in” or “ad out” following “deuce”. The first player to win 6 games and to be ahead by two games wins the set.

Your scores are shown at the top of the screen corresponding with the color of your player. Playing against a human player requires you to adapt to their unpredictability, whereas the computer is limited to a set number of programmed moves and returns. Much like real tennis you make your shots depending on the angle the ball is hit by the racket. If you hit the ball in the center of the racket, the ball will go straight. If the ball is hit on the edge of the racket, the ball will go at a sharper angle. If you miss the ball by doing this technique your opponent will score a point on you.

***TIPS — Learning the movements from a human opponent and or the computer opponent will make you top notch. Anticipating the angled shots and being able to counter them with your shots will gain you many wins in the point scoring department.

When you’ve earned your patch in Tennis by Activision for the Atari 2600, just visit https://www.ActivisionPatches.com.