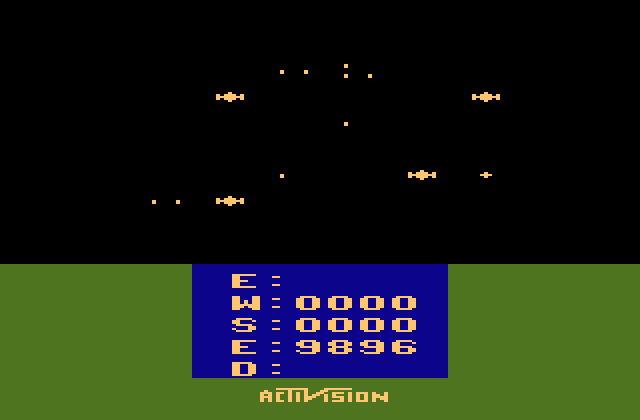 The minimum score required in Starmaster by Activision for the Atari 2600 to earn a patch was: Ensign 3800 points, Leader 5700 points, Wing Commander 7600 points, and Starmaster 9000 points. The best advice in Starmaster is to read both manuals, so that you know all of the nuances of the game. The manuals gives some really good tips and vital information. Make sure both difficulty switches are set to B. Activision Starmaster was designed by Alan Miller.

Activision StarMaster is another one of those games that will have you biting your nails. Plug the joystick into the left side, as this is the only side that you’ll be using in Starmaster. The controls are up, down, left, and right. But the thing to remember is when you hold the joystick to the right, the screen will move to the left. This comparison is sort of like looking through a telescope. When you move the scope in any direction, the reverse side tip of that scope goes into the opposite direction. The b/w & color switch brings up your galactic chart and switches back to play mode. You’ll have four different gaming levels to choose from. “E” for Ensign which is the easiest level, “L” for leader, “W” for Wing Commander, and “S” for StarMaster, which is the hardest level.

During game play you will encounter four modes of operation. The Galactic Chart, Warp Travel, Engaging the Enemy, and Docking with the Star base. When you hit the b/w & color switch you will notice several things. Your ship is represented by a “+” mark, the star bases are “I-O-I” shaped icons and the enemies are shown as dots on the screen. Your MACC or Mission/Attack Control Computer is displayed at the bottom middle of the screen in blue. There are a series of letters E,W,S,E,D they represent different things that you’ll need to know while playing. The first “E” is your game level “E for Ensign” “L for Leader” “W for Wing Commander” and “S for StarMaster”. Each descending letter also has their specific duties, “W” for warp energy that is expended to travel from one position to another. The letter “S” is for star dates that have elapsed while engaging in flight combat. The letter “E” for your energy that is depleted and is remaining throughout your entire game play. The letter “D” for the damage that is taken.

The bold colors around your “MACC” are represented for different functions that corresponding with each color. Green for an empty sector, Red for enemies that are present in this sector, and Blue for a Star Base being in this sector. The damage control indicator shows what exactly is going wrong with your ship. If any one of these letters – “LSWR” – show up on the “D” row, you’re in serious jeopardy of being unable completing your mission. Laser, Shields, Warp Drive, Radar. You can dock at a starbase to repair the damages, but it deducts time and 100 points for docking.

You press the reset button to start the mission and as you start your warp through space you will encounter meteors. You can either avoid them by steering around them or shoot them to destroy them. Each meteor that you collide with drains between 100-500 energy units from your reserve shields, so be very mindful of your skill set abilities.

Once you’ve entered an area that has an enemy that is close by, your gun sight will start to flash, indicating that you should be poised to fire the laser. The objective here is to kill the enemy as fast as you can using the least amount of energy (shots and time) and all of this without taking any damage. Once this is completed the colors of your control console change from red back to green, meaning all clear in that sector. You now advance on to the next invaded sector by switching the b/w & color switch again to see the star map. Select a sector to travel to that is occupied by enemies.

If you are running low on energy or if you have damage to your ship, you can always dock with a star base along the way. But doing this sacrifices needed time to defend and destroy as well as 100 points deducted from the final score. Docking with the Star Base is much like getting the enemy in your cross hairs, you do the same until you’ve docked and your energy is instantly boosted back to max 9999. Keep in mind that your star bases are under the threat of being destroyed. So careful observation of how close the enemies are to those star bases is important. Try not to let any star base be surrounded by the enemies or they will destroy it, costing 500 points from the final score.

Your mission is over when all the enemy ships are destroyed, or your ship is destroyed. Your mission also ends if you run out of energy. You can refer back to your galactic chart once again by pressing the b/w & color switch to see your evaluated mission and ranking score.

You score points for a number of things along the way, you also take deductions depending on how well or poorly that you performed on your mission. Each game level has a “base score” with which you begin before deductions are made. Many key things factor in on how you are ranked.

***TIPS: Learn the control of how to shoot and destroy effectively using the least amount of energy. Be ready to immediately flip to the galactic chart and warp as soon as possible. Every seconds saved counts toward a better score. Try not to waste any time at all. Every star date elapsed (about 4 seconds) deducts one point from your final score.

** If you manage to finish game 4 (S for Supreme Starmaster level) without losing any starbases, you will encounter a bug in the scoring. Reported by David Yancey. You must manually compute your score by making the proper deductions for docking (100 points each) and elapsed stardates (1 point each) from the base score of 9999.

Game 4, the Supreme Starmaster level is particularly difficult. Frank P. Walters, one of the greatest Starmaster players ever in history was kind enough to share his strategy in an article here. This is the only way to win without having the bottom right starbase destroyed when it is surrounded by the aliens. This is the most authoritative strategy ever written on Activision Starmaster! Learn it Ensign! 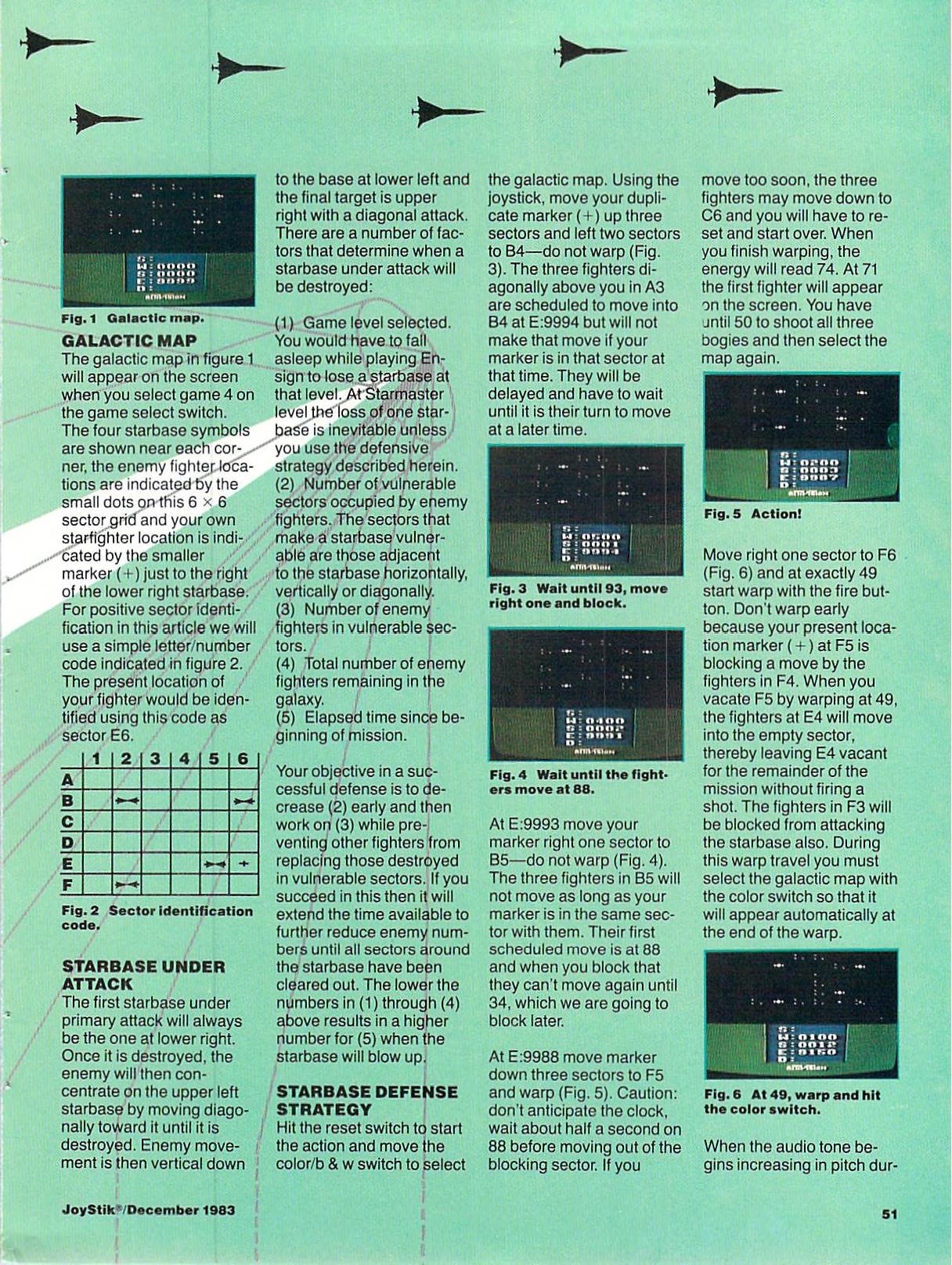 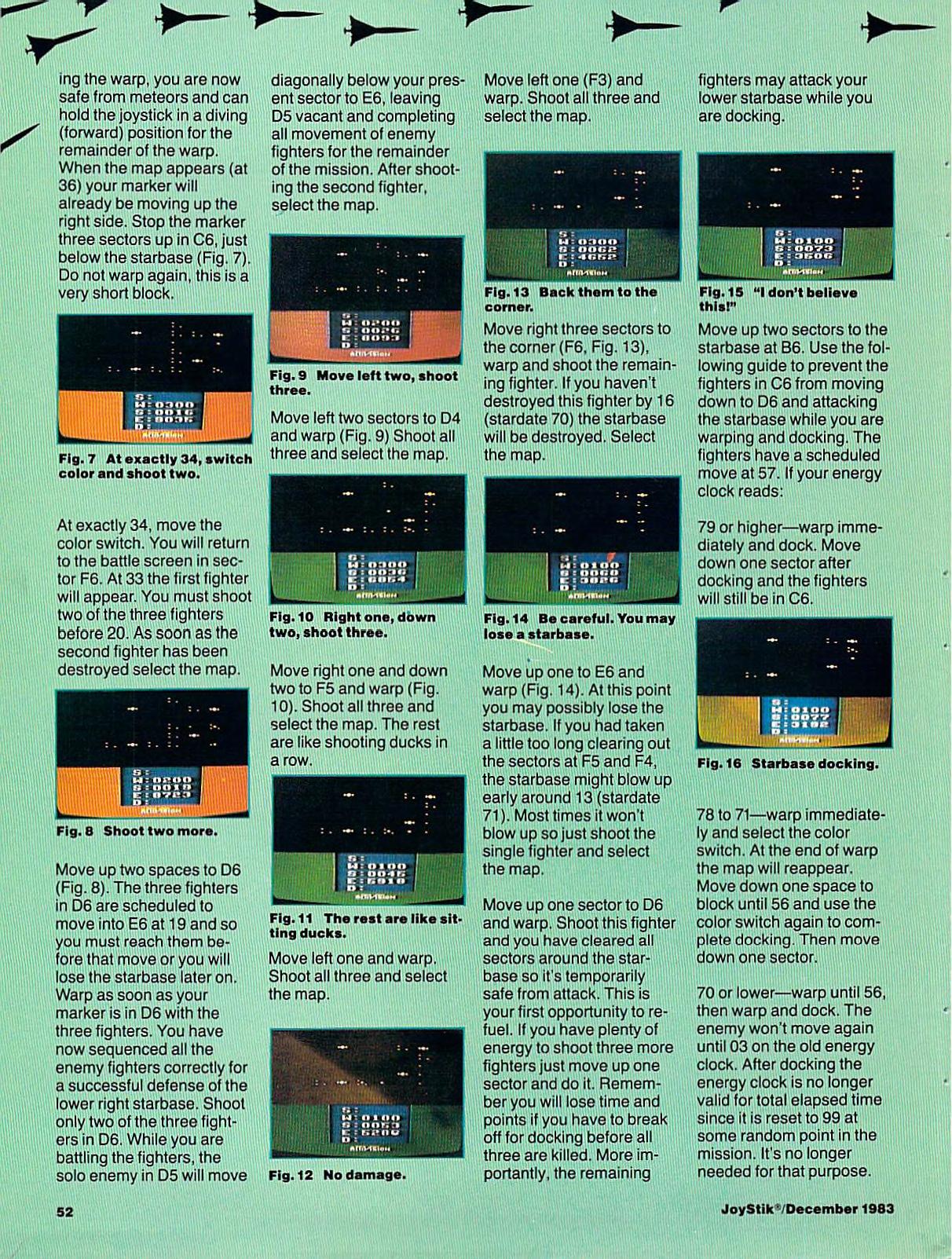 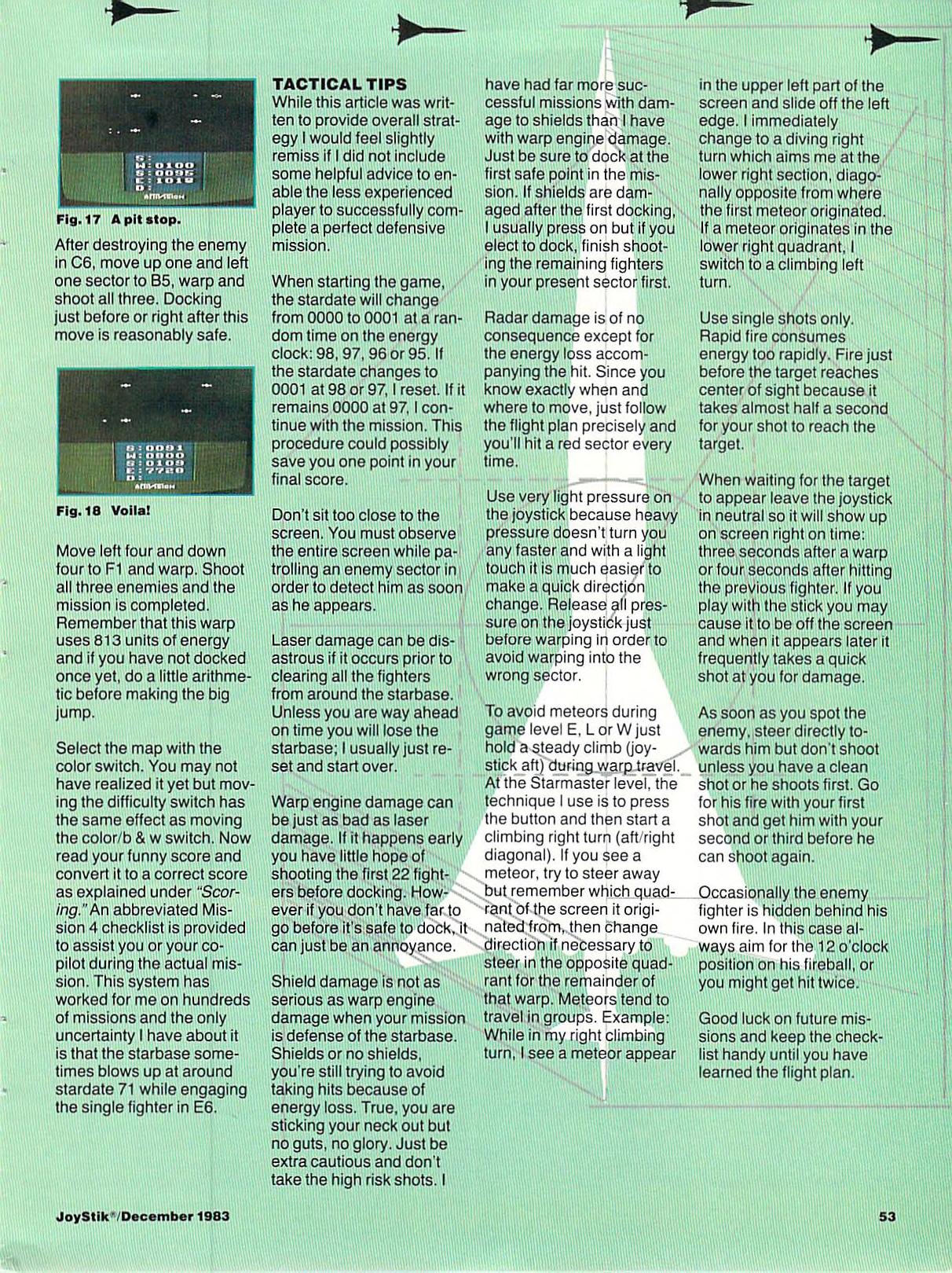 When you are ready to submit a world record score for Starmaster by Activision, check the scoreboard here: https://www.twingalaxies.com/game/starmaster/atari-2600-vcs