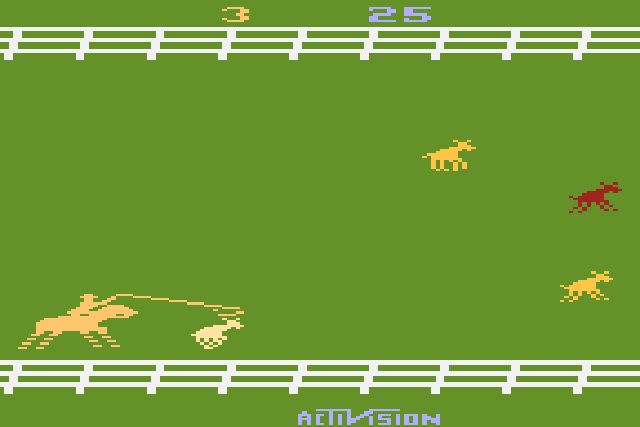 Activision Stampede is one of those games that looks easy until you actually play it. So let’s saddle up and give Stampede a ride. The game setting should be set to left difficulty “B” . Use only one joystick in this game. There are eight game selections to choose from. Even though the game does not change in appearance, your level of difficulty does in the game that you select progressively beyond game 1. Your left difficulty switch controls the length of your rope, from a shorter distance (A) to a longer distance (B). The controls are very simple in this game: “up and down” and press the button to throw the lasso to rope the stampeding calves.

The calves are scored by their color. There are four different colors of calves “light brown or Jersey”, “medium brown or Guernsey”, “reddish brown or Hereford” and the “black Angus”. Colliding with a steer skull will make the horse buck and precious time is passed with each bucking movement. When in this position you are unable to rope the oncoming calves, thus missing them if they go past and ultimately losing a needed stray count.

Your score is in the middle top of the screen and your reserve stray count is just to the left of your score. You’ll receive an extra stray count with each 1,000 points that you score. Each game will start out with three extra stray count and if you’re skilled enough you can have a max reserve number of nine.

You score points for each calf that you rope in and each Black Angus that you collect. If you let a calf or Angus pass you, a stray count is deducted for each. Needless to say, gaining extra stray counts is a lot harder than losing them. Rope the calves by being right behind them on the row that they are in. If they get to close to you, you can always bump/herd them ahead to focus in on the ones that are coming toward you that are closer and easier to rope.

The color cycles are indicative of the speeds of the calves. The lighter the color the faster the herd will go toward the horse. So controlling the colors is a must. And reverting them back to a slower darker color to make controlling the herd easier is the immediate goal.

***TIPS: Try grouping the sets of calves in pairs of twos. The upper two set, the middle two set, and the bottom two set and rotating through each set of colors will bring you back to the color where you started. These are called “color cycles”. Doing this method or style will help in the separation and grouping of the herd plus making it easier to rope the Angus by knowing that once you finish a color cycle that the black Angus will appear near to that lane which you just cleared out. The Angus appears in every other row in which you start the color cycle. You will get one skull row and then one Angus row.

*** If you herd the calves forward before you rope them, the next set will take much longer to appear giving you more time to perform other needed actions. This is a very helpful tip and can be used often during game play.

*** There is a bug in the game first reported by Activision player David Yancey, that makes the calves impossible to herd forward when you reach the 8th herd at around 35-36 thousand. This essentially ends the game as it becomes unplayable past this point.

*** There is no exact max score for this game per se. It should be possible to break 37 thousand with an extremely talented player and no mistakes of missed calves resulting in lost points.

Video of how to play Stampede with the winning herding pattern: https://www.youtube.com/watch?v=uBPmwTeoFLc

When you are ready to submit a world record score for Stampede by Activision, check the scoreboard here: https://www.twingalaxies.com/game/stampede/atari-2600-vcs

And when you’ve earned your patch, just visit https://www.ActivisionPatches.com.