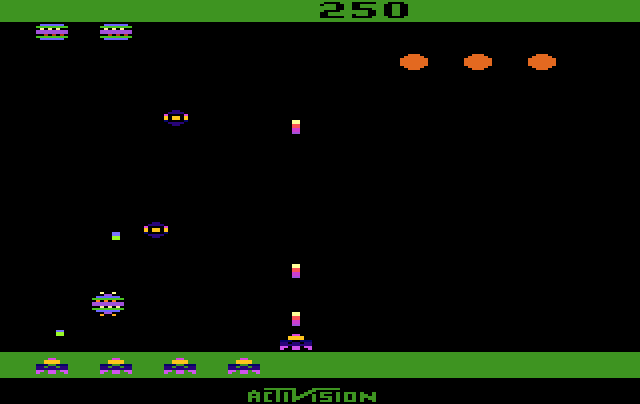 Activision Spider Fighter is one of those fast paced fun games that will make you come back for more. The controls are as usual: left, and right. The button is used for firing at the attacking enemy insects that are shooting at you. The left difficulty switch controls your gaming level speed and fire power where your right difficulty switch makes a difference of straight line fire, compared to the much easier guided firing style of game play. The score accumulates much faster on difficulty A if you want to max the score in as little time as possible. It is possible to switch between difficulty A and B when needed. If you run low on extra lives while playing on Difficulty A, build them back up using difficulty B setting for a while then switch back to difficulty A. This is NOT allowed if submitting a record score to an online scoreboard.

When you start the game you will notice that you have four extra spider fighters in reserve that are at the bottom of the screen. The scoring is at the top middle of the screen. As you shoot the insects, you will gain needed points to add to your gaming total. As you progress through the levels, so does your insect point values if you are playing on the expert A level that is. Playing on expert level causes certain fruits that you are defending to multiply the values of those insects at which you are shooting.

Each enemy insect pod at the top left side of the screen shows exactly how many enemy bug pods that you have left. Each pod contains several enemy insects that will shoot at you. If you don’t kill them fast enough they will steal your fruit. For every stage that you complete with all of your fruit intact, you gain an extra life with a max of four in reserve. However if you get hit by one of their bullets you lose a life and it is replaced with one of your reserve lives. If you happen to survive through a stage without losing a life you will gain a 500 point bonus. If you exhaust all the reserve lives and you get hit by enemy fire, the game ends.

There are a number of different fruits that you have to defend. The one with the most point value is the banana. Once you’ve reached the banana level there is no other fruit that appears after that. Your own firing speed dramatically increases when you reach the banana level. Get ready for some FAST paced exciting action!

TIPS** Learn the mastery of shooting and evading. This will help greatly in the upper levels of this game. Being able to survive with a slalom style of “shoot and run” is ideal. The game score maxes once you reach 900,000 points.

When you are ready to submit a world record score for Spider Fighter by Activision, check the scoreboard here: https://www.twingalaxies.com/game/spider-fighter/atari-2600-vcs