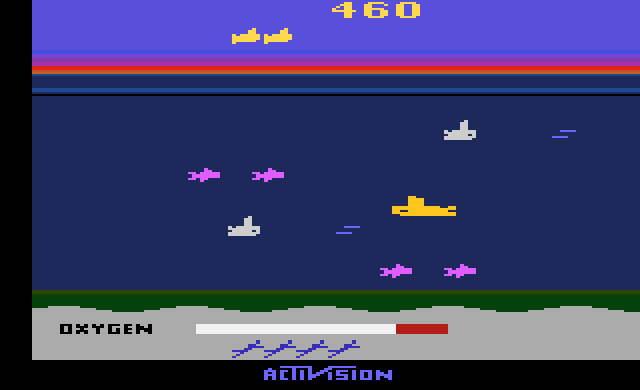 The game starts when you submerge the sub. The controls of this game are pretty straight forward. You steer the sub to the left, right, up, or down. The button shoots torpedoes. Holding the button down results in continual fire. Your score is shown at the top of the screen. Reserve subs are under your score. You begin with three reserve subs, but can have only a maximum of six. You will receive an extra reserve sub with every 10,000 points scored.

You have an oxygen meter at the bottom of the screen. Once you submerge the sub the oxygen tank will continually deplete your remaining amount until it is used up or until you resurface again. If you are low on oxygen you will hear a warning sound to let you know to get moving or you will lose a sub when the oxygen supply runs completely out. If you surface your sub without any divers collected you will lose a reserve sub.

*** SUPER HINT: It is possible to keep the top of the sub just out of the water, which will stop the oxygen from depleting without actually surfacing.

The divers that you rescue are shown below your oxygen meter. You get points for rescuing the divers. They start off with a value of 50 points each, building up to a max point value of 1000 points. Once you’ve rescued two sets of six divers there will be an enemy patrol sub at the surface. This enemy sub will be on the move constantly. When you go to the surface to return the divers that you have rescued, make sure that you are behind the oncoming enemy sub, otherwise you will not be able to move until all your divers are returned and your oxygen tank is replenished. A collision will result in the loss of a reserve sub.

There are enemies in this game such as sharks and enemy subs which shoot back at you. Points are awarded by shooting these enemies. Every time that your sub surfaces with the allotted six divers, the point values of the enemies increase by 10. Once you reach the max value of 90 points each, this is where the game becomes really interesting. There are waves of the oncoming enemies. They start off in groups of one, then increase to sets of two, and cap with a max of three. There are always four rows of enemies.

***TIP: Keep in mind there are ways of controlling the groups of these enemies and using this technique to your advantage. You can rescue a diver and then surface to reset the enemies to their next level. This is important in later rounds above 300,000 when you are facing groups of 3 enemies and the divers are all on the bottom row and swimming away from you before you can reach them at the edge of the screen. If you can manage to rescue one diver, you can surface to get an easier grouping level of enemies.

Getting a feel of how to navigate the waters without colliding with any sharks or subs is a must. So rather than avoiding a row of three enemies, reduce them to one per row as this will be an easier way to maneuver around them. You can use the 5,4,2,6 method where you collect five divers, surface, lose one diver, then having four divers you re-submerge, collect two more divers, and resurface with all six divers to collect much higher oxygen bonus (and sometimes a bonus reserve sub when you cross a 10,000 point threshold. This also works to get away from the dreaded triple enemy levels and back to the single levels like described above in the tips section. There is also a small area just near the surface where your sub can hide from the top layer of enemies who are in the water crossing the screen and still remain under the enemy patrol sub on the surface. Once you get to the level where there are three enemies in a row you can shoot two of them, so only one remains per row. Then it’s easier to collect the divers having only one enemy per row to shoot when the divers appear. The maximum score in Seaquest is 999,999 points.

When you are ready to submit a world record score for Seaquest by Activision, check the scoreboard here: https://www.twingalaxies.com/game/seaquest/atari-2600-vcs