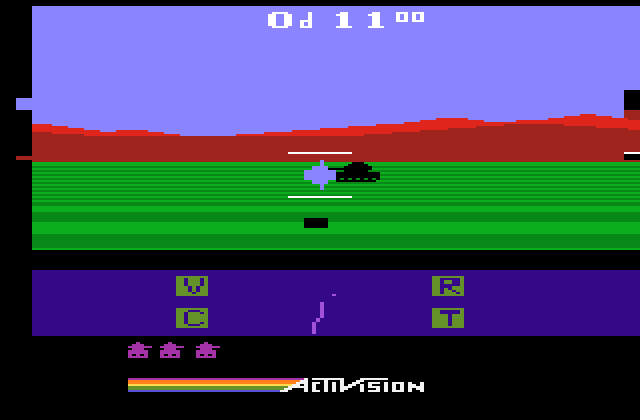 The minimum score required in Robot Tank by Activision for the Atari 2600 to earn a patch was: 48 tanks (Medal of Merit), 60 tanks (Cross of Excellence), 72 tanks (Star of Honor). The best advice in Robot Tank is to read the manual, so that you know all of the nuances of the game. The manual gives some really good tips. Make sure both difficulty switches are set to B. Robot Tank for Activision was designed by Alan Miller.

For each enemy tank destroyed you will see a small black tank appear at the top of the screen. Once you’ve destroyed twelve enemy tanks or a “squadron”, a black square with the number 12 will appear. As you start the game you have three red tanks at the bottom of the screen. These reserve tanks have a maximum number of twelve. You are awarded an extra reserve tank each time a squadron of 12 enemy tanks are destroyed. You lose a life when you are hit by enemy tanks and your screen has the effect of static on it.

The days and hours are shown at the top of the screen in military time. The cross hairs are indicated by the white plus mark in the center of the screen. The damage sensors are “V” for Video, “C” for Cannons, “R” for Radar, and “T” for Tracks. If you’ve taken damage to any of these features, it can never be repaired. That means you must finish out the rest of the game with those handicaps or continue with them until you lose a tank and it is replaced with a non-damaged tank from the reserves.

You will be able to see all enemy tanks with an ever spinning radar scanner in the lower center of the screen. There will be a dot on the radar. The dot shows the location of an enemy tank and its proximity to your own position. In addition to the day and night visibility changes, there are special weather alerts that you need to be aware of, such as snow, fog, and rain. With each alert comes a special kind of difficulty. In the snow you will slide. When it is foggy the visibility is reduced. And when it rains you will move much more slowly. You must adapt to each special condition for survival in this on-going game.

You can evade enemy fire by backing up your movements to a left or right direction and once the enemy’s rocket is off the screen, that rocket can no longer hit you. You can also control your own fire by using this same technique by shooting and moving while controlling the direction of your fire to hit the enemy tanks more easily.

***TIPS*** The game score maxes at 144 tanks (12 squadrons). It is a good idea to practice the evasion of the oncoming rockets with the backup and turning movements as these rockets will become harder and harder to evade in the advanced stages of the game. It gets really difficult after you have destroyed 59 tanks. The 5th squadron and beyond is really tough! Their rockets move more quickly. And the enemies move and fire much more quickly.

When you are ready to submit a world record score for Robot Tank by Activision, check the scoreboard here: https://www.twingalaxies.com/game/robot-tank/atari-2600-vcs