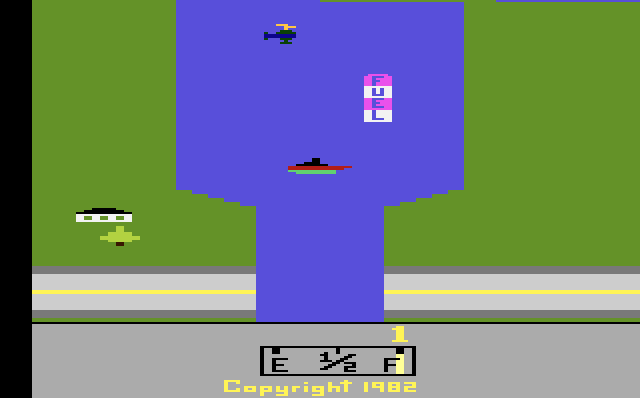 The minimum score required in River Raid by Activision for the Atari 2600 to earn a patch was: 15,000. The best advice in River Raid is to read the manual, so that you know all of the nuances of the game. The manual gives some really good tips. Make sure both difficulty switches are set to B. Activision River Raid was designed by Carol Shaw.

River Raid is one of those fast-paced action scrolling games where you shoot, evade, and refuel. The controls for this game are up, down, left, and right. When you push the stick up you accelerate the jet. To reduce speed push down on the stick. Navigate the jet to avoid enemy attack by flying to the left or right. The button controls shots to the enemy targets. By holding the button down you engage continual fire.

The difficulties are the A/B button’s. “A” being the harder difficulty with missiles launching in a straight direction. With difficulty “B” you can guide the missiles to hit the targets more easily. There are two different gaming selections, one player mode and two player mode. In two player mode each player alternates turns after losing a life.

You start the mission by pressing the button or moving the stick. You have three extra ships in reserve to use in the mission. The max number of extra lives in reserve is nine. You gain an extra life for each 10,000 points scored. Your score is shown at the bottom of the screen placed right above your fuel capacity. Each new game is started out with a full tank of fuel. Each time you need one of your reserve jets, it starts with a full tank of fuel.

As you play the game you will notice that the availability of fuel will decrease the farther you progress into the game. Fuel becomes really critical around the 125,000 point level. The faster you fly the faster you can reach the next fuel depot. Once your fuel reaches 1/4 tank you will hear a warning sounds to indicate that your fuel is low. Don’t run out of fuel or you will lose a jet.

IMPORTANT: In the later stages of the game (after 125,000 points approximately), I highly recommend flying the straightaway sectors, that appear at every other bridge, at full speed, shooting only when necessary. Avoid shooting to prevent accidentally shooting a fuel depot. You need EVERY ONE of them. This is THE KEY to maxing the score in this game! Some people think the max score is impossible, but it is not that difficult when you perfect this technique!!!***

To reach each new level you shoot the bridge. If you do not do this in time and you collide with that bridge you will also lose a jet. Navigating through the islands, thin channels, and bays add to your level of difficulty. If you hit an island or the side of the river while flying, you will lose a jet. Although the game seems never ending the game will continue to play until you max the score or lose all of your extra remaining lives.

***TIPS: Learn the course layout, when to fly fast, and when to use your fuel depots. The game maxes at 1,000,000 points and the score will change to six exclamation points. You can keep flying and shooting beyond that point, but the score never increases further, and you never earn any more extra lives. Update: I scored one million again on a different rom where this did not happen. The game froze at one million as you would expect!

When you are ready to submit a world record score for River Raid by Activision, check the scoreboard here: https://www.twingalaxies.com/game/river-raid/atari-2600-vcs