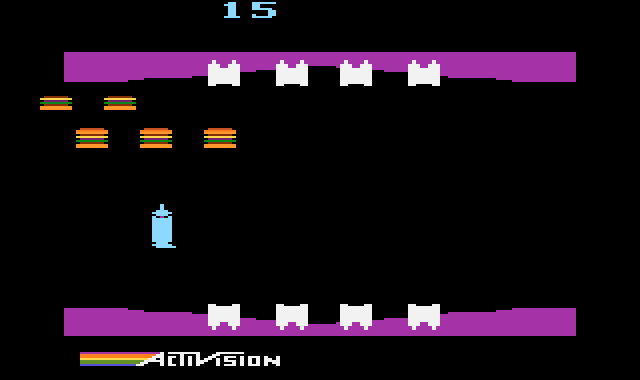 The minimum score required in Plaque Attack by Activision for the Atari 2600 to earn a patch was: 35,000 points. The best advice in Plaque Attack is to read the manual, so that you know all of the nuances of the game. The manual gives some really good tips. Make sure both difficulty switches are set to B. Plaque Attack was designed by Steve Cartwright.

Plaque Attack is a shoot’em up style of game play and will have you on the edge of your seat. Plaque Attack is similar in many ways to Steve Cartwright’s earlier game, Megamania. There are four gaming selections to choose from. One and Two player modes and the increase of difficulty and speeds depending on which you select. The controls are pretty conventional with this game. Pointing the joystick up makes you aim to the top of the mouth, and pointing down makes you aim to the bottom of the mouth. Left and right moves in those directions.

Your points are scored when you shoot the attacking enemy foods. Shots are unlimited, so do not worry about how many times you fire at the on coming enemy foods. You’ll also receive bonus points at the end of each wave for each tooth remaining, and for the remaining amount that is left on the tube of tooth paste (timer). Your “timer” starts off with a full tube of tooth paste. As your timer runs down, your tooth paste tube will shrink in size. This is an indication to hurry finishing up that wave of enemies.

You start your game with eight teeth to defend similar to defending the cities in Missile Command. There are also eight waves of food that you must survive. With each new wave that you complete, the game gets harder and harder. You’ll have a maximum of sixteen teeth to defend, so it’s a keen idea to be aware of which are easiest to protect on the harder waves.

Your tooth changes color to yellow once the tooth is decayed by contact with an enemy. You can use your tooth paste to heal that tooth by shooting the enemy in contact with the tooth quickly! If you cannot protect it in time you will lose that tooth. For each 2000 points scored you will be rewarded with a bonus tooth that is shown below your score. These bonus teeth are awarded at the start of each new wave to fill in the empty spaces of the teeth that you lost during that level.

There are food items such as French Fries, Hamburgers, Hotdogs, Candy Canes, Ice Cream Cones, Strawberries, Cherries, and others you must defend against. The game play and style is much like Megamania, but you must be agile enough to shoot in two directions rather than just up as in Megamania.

Learning the movements of each attack wave and the patterns that they use to attack you is essential. It’s a good idea to anticipate which enemy attacks in which style, so you can defend more efficiently without losing any teeth. It is also a good idea that when you are down to one tooth to defend just defend that one tooth as best you can. As you continue to score points, extra teeth will be added, so do not worry. Because if you are close to gaining another 2000 points, you will get a replacement tooth when the bonus points are added. Your game is over once you have lost all of the teeth and have exhausted all your toothpaste (timer). The score maxes out at 999,999. Good luck with that!

When you are ready to submit a world record score for Plaque Attack by Activision, check the scoreboard here: https://www.twingalaxies.com/game/plaque-attack/atari-2600-vcs