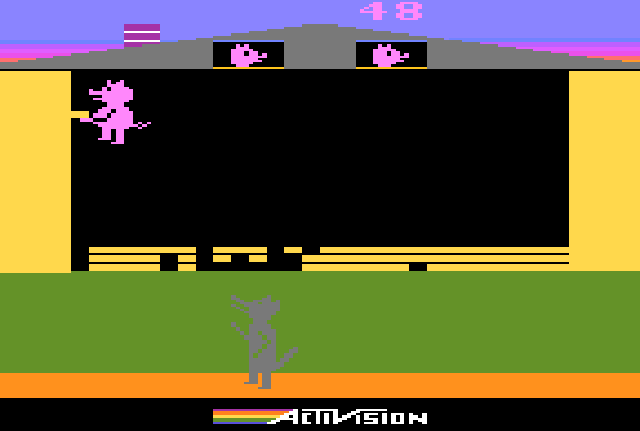 The minimum score required in Oink! by Activision for the Atari 2600 to earn a patch was: 25,000 points. The best advice in Oink! is to read the manual, so that you know all of the nuances of the game. The manual gives some really good tips. Make sure both difficulty switches are set to B. Oink! was designed by Mike Lorenzen.

The difficulty switches in this game make a huge difference in how it’s played. When selecting difficulty A, the player must drop each block by walking toward where it will be dropped. In selecting difficulty B, your player can just pick up a block and press the button. The block will automatically be placed in the opening that is available.

Your objective is to drop blocks where the wolf has blown openings in your structure. Each time the wolf huffs and puffs, his breath makes another opening appear in the base of your house. You have a row of 13 blocks stored in the upper part of your house. Use these blocks to fill in each of the openings that the wolf has created in your structure. As you use these blocks, you’ll notice that there will be gaps in the area where you can grab them. These blocks will not be replaced until you have used all of the blocks that are currently shown. If you collide with the wolf’s breath stream you will be temporarily frozen and then regain your movement again when you reach the base of the structure. If you are struck by his breath and pulled out of the structure through a hole created by the wolf, you will lose a life and begin again defending the next house.

You earn points by each block that is dropped that fills in the openings that the wolf has made. Your reserve pigs are displayed at the top of your house in window panes. You earn points as you drop blocks into where the wolf has blown openings into your structure. Each time you use up a group of 13 blocks, the point value for each block increases, up to a maximum of 400. The speed of the wolf also increases with each consecutive block group completed. Your score is shown at the top center of the screen.

** TIPS ** This game is unforgiving and does not give you any extra lives during game play. You will have to learn how to survive by dropping the blocks almost as fast as the wolf is blowing holes in your structure. Keeping all of that in mind and having to contend with his constant streams of breath that poke through your house’s openings. Notice that the wolf follows a specific pattern that you can predict and use that knowledge to avoid his stream of breath. All you need is a couple of tiny blocks under you to prevent from being completely pulled out of the house if you should be hit by the wolf’s breath stream.

You’ll notice that eventually he spends most of his time blowing his breath through the empty space that he has created in an effort to hit the pig. So rather than hurry recklessly, try to time your movements when he is facing in the opposite direction or is a step away from the hole in the structure that you need to cross to get the last remaining blocks to finish the round.

When you are ready to submit a world record score for Oink! by Activision, check the scoreboard here: https://www.twingalaxies.com/game/oink/atari-2600-vcs