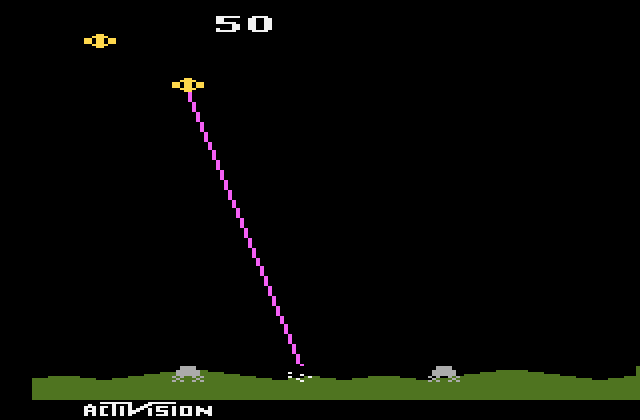 The minimum score required in Laser Blast by Activision for the Atari 2600 to earn a patch was: 100,000 points. There was also a special award patch for the max score of 1,000,000. Laser Blast was designed by David Crane.

The best advice in Laser Blast is to read the manual, so that you know all of the nuances of the game. The manual gives some really good tips. Make sure both difficulty switches are set to B.

Get used to the repetitiveness of this game. Although modernistic for its time, with the glow of the Laser Blast itself, and the sound of the laser coming your way, this game was a wonder to see, watch and play. Laser Blast was possibly the first home video game shooter where the enemy was on the ground and the player was in the air.

Laser Blast by Activision is pretty straight forward — shoot the enemy or be shot. The targets are in multiples of three. You can form your own style or pattern of shooting. But it all depends on which is easier, as it is the endurance that will do you in. That and the cramping of your hand from holding your controller rigidly as the seemingly endless line of targets reappear.

You move the controller left or right to aim at the targets on the ground before they hit you. To raise and lower your ship you push the joystick forward or pull it back. In later rounds of the game, you cannot lower your ship. It becomes restricted to the highest level on the screen.

Although there are four different levels of game play, the game plays essentially the same. Game variation 1 is the slowest. Game variation 4 is the fastest. When you are good enough, select game 4 to score a quick million points in approximately 1.5 hours.

Your score is represented in the upper left side of your screen. You gain points for shooting all the targets below and as your levels increase so does the point value of the targets. You gain an extra ship at each 1000 points you score, with a maximum number of six in reserve. Don’t stay in one place too long as your chances of being hit increase drastically. And if you do get hit, fly your damaged ship into one of the bases below as you still can get points and destroy it.

** TIPS If you survive long enough you will be rewarded with six exclamation marks “!!!!!!” indicating that you’ve maxed that game at 1 million points. At one million points your game is done and you can no longer continue…You’ve beaten the Laser Blast game.

When you are ready to submit a world record score for Laser Blast by Activision, check the scoreboard here: https://www.twingalaxies.com/game/laser-blast/atari-2600-vcs