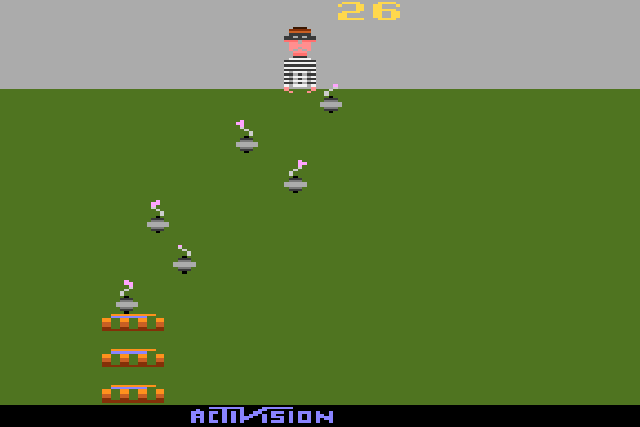 The minimum score required in Kaboom! by Activision for the Atari 2600 to earn a patch was: 3,000 points. The best advice in Kaboom! is to read the manual so that you know all of the nuances of the game. The manual gives some really good tips. Make sure both difficulty switches are set to B. Kaboom! was designed by Larry Kaplan.

You better hold on to your seats, as Kaboom! by Activision will test your reflexes for sure. There are two gaming selections to choose from, one player mode or you vs another player in two player mode. There is also a difficulty in the bucket sizes that you will be using, one being larger (B = normal size) and another being much smaller (A = half the normal size).

You use your paddles by turning to the left or to the right to make this gliding effect in your movement of the buckets. Getting the feel for this smoothness is a must. Having a good non-jittery set of paddles is an absolute must. To start your game you press your button on the paddle and begin to collect each bomb that is dropped by the mad-bomber with your buckets of water.

There are eight levels of bombs that are dropped and depending on which level you reach, the patterns are different, as well as the speed of the falling bombs. The bombs are spaced closely on even numbered levels and further apart on odd numbered levels. The score for each bomb caught is the same as the level number you are on – 1 point for level 1, 8 points for level 8, etc.

Level 8 is the highest level of game play and the fastest level of game play. At this level the pattern is the same, so get used to the repetition of the dropping of the bombs and pray for a good paddle controller and an easy pattern to catch as this game is quite unforgiving. When you do miss a bomb “and everyone does”, all of the bombs on the screen will explode and you will lose one bucket from the bottom. But do not worry as you can always earn another bucket, as it is replaced at each 1000 points that you score. There is a max of three buckets that you can use while playing. And none are kept in reserve ever.

*** TIPS: Trying the slalom method of movement while playing will give you better accuracy in collecting the falling bombs. I usually stare at the center of the screen as to not be hypnotized by the pattern of the falling bombs. This method helps in seeing the entire screen vs just following the bomb drops. Try not to blink or to move your eyes horizontally following the bomb path, because you will lose sight of the bombs just long enough to lose a bucket. You can also use the sides of your buckets to catch bombs. It is not necessary for the bombs to fall into the top of the buckets.

When you are ready to submit a world record score for Kaboom! by Activision, check the scoreboard here: https://www.twingalaxies.com/game/kaboom/atari-2600-vcs