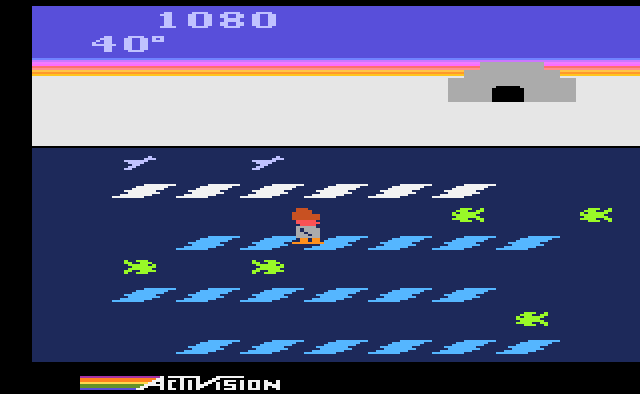 The minimum score required in Frostbite by Activision for the Atari 2600 to earn a patch was: 40,000. The best advice in Frostbite is to read the manual so that you know all of the nuances of the game. The manual gives some really good tips. Make sure both difficulty switches are set to B. Frostbite was designed by Steve Cartwright.

Frostbite is a simple four way movement style of game. In the upper stages of Frostbite when you jump, you can control the movements, which almost seem to be in diagonal pattern. By pressing the button, you reverse the direction of the movement of the ice sheets in the row that you are standing on to accommodate your jumping to the other ice sheets. But this comes with a cost. Each time you do press the button, the igloo is reduced by one block of its structure.

As you jump on the sheets of ice their color turns from white to blue. Once this happens you cannot collect any additional points from jumping on them until all the ice sheets are blue. It is only then that they change back to white and you can start to collect points once again. Once you have collected enough blocks for your entire igloo structure to be completed, a door will appear on the igloo that indicates that you can return to it.

Each new level is started with the temperature being 45 degrees. As the game level progresses, the temperature will drop. There is a day and night mode in which your character must build his igloo that is indicated by the color of the snow going from white to gray. You will also need to make four igloos for each night and day mode. Your bonus points are collected by the completed igloo from its blocks, the number of degrees that remain on your gaming thermometer, and collecting the fish that pass along the floating ice sheets.

There are obstacles that you must contend with, such as crabs, clams, and geese. They hinder your progress while jumping across the sheets of ice. But if you are able to avoid them, you won’t lose any lives. At the fourth level there is a Polar bear that appears making your game play a bit more difficult.

There are a total of nine levels of difficulty in Frostbite by Activision for the Atari 2600. With each higher level your block values and entering the igloo increase your bonus points. In the later stages of the game such as level nine, when your score reaches 120,000 points, the game difficulty is really ramped up. Keeping with this pace seems almost impossible, but it can be done.

Developing a sound strategy for how you jump is a must. Timing and positioning, in making your jumps perfectly executed, while making it back to the igloo safely while avoiding all the enemy obstacles is the key to winning in Frostbite by Activision. You lose lives if you mistakenly miss the ice sheet and end up jumping into the water, if you get chased by the polar bear off the screen, and if the temperature goes to zero. Your game is finished when you have exhausted all of your extra lives.

There are two types of ice sheets that you can jump on. One type that is solid and another that splits apart. The ice sheets that split apart can be used to your advantage, while jumping to gain a further distance. When they go back together again, reducing its width/size, this too adds a level of difficulty while jumping and landing correctly, so you do not fall into the water as they reshape.

There is an extra life that is awarded every 5,000 points. A special accomplishment reward of a fish that appears below your score between the temperature and your remaining lives is awarded at the 95,000 point mark.

***TIPS: Hint – This game score rolls at 1 million points, so be certain to record your whole performance as the score doesn’t max and end the game like most other Activision games.

When you are ready to submit a world record score for Frostbite, check the scoreboard here: https://www.twingalaxies.com/game/frostbite/atari-2600-vcs