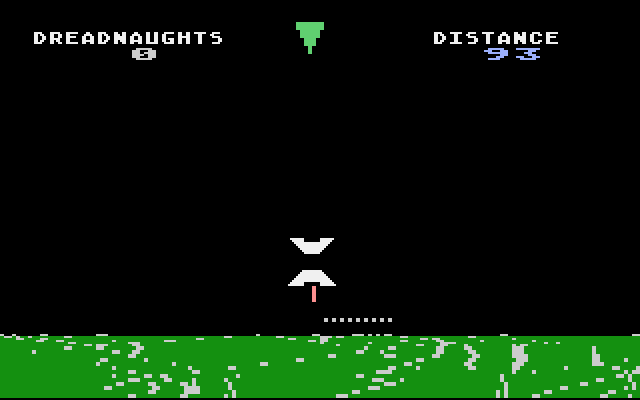 Dreadnaught Factor by Activision is a side scrolling shooter game where your ship bombards the opposing dreadnaught ships. Each new dreadnaught at the beginning of each cycle is represented on the right side center of the screen by the shape of the particular dreadnaught you will be attacking. Dreadnaughts have turrets and cannons that shoot at you while you are flying over them, so it is a good suggestion to get accustomed to using the awkward Intellivision controller for accuracy.

There are several classes of dreadnaughts, so it’s a good idea to plan your attack depending on which class you are about to face. Flying over the Dreadnaught quickly by “pressing the disc to the right” is not always the best idea in this game. Flying slowly by “pressing the disc to the left” to be more precise will gain you more accuracy and greater damage to the dreadnaught. You can drop bombs “by pressing the lower side buttons” on these targets or use straight forward laser missiles “by pressing the upper side buttons”. Getting used to the controller is of the greatest importance.

You get several passes to destroy the dreadnaught, and the targets that you’ve already hit will remain destroyed until you defeat the dreadnaught. But with each new pass if not destroyed, the dreadnaught will get closer and closer to your stargate, the giant “X” on the center of the starting screen. If the dreadnaught reaches this “X”, you and your planet will be destroyed.

The game skill level is shown depending on the color of the stargate “X”. Gray is the easiest level and purple is the most difficult. There are also seven levels of difficulty to challenge you for hours. On the most difficult level there are 100 dreadnaughts in total to destroy. Once you have defeated the dreadnaught, it is replaced with another depending on which level you chose. As the game progresses, so does the difficulty of the dreadnaughts as they fire back at you. Best of luck in this adventure.

When you are ready to submit a world record score for Dreadnaught Factor by Activision, just check out the scoreboard here: https://www.twingalaxies.com/game/dreadnaught-factor/intellivision