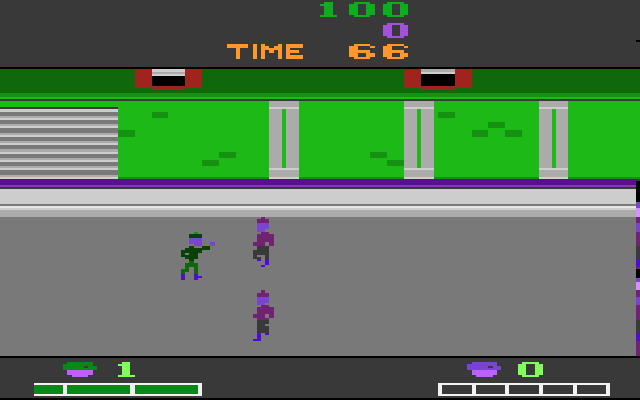 Activision’s Double Dragon shuttles you into the bad streets of the city to fight the notorious street gang “The Black Warriors” who have kidnapped your brother’s girlfriend Marion, defeat the boss of the gang, and bring Marion to safety.

There are weapons that the Black Warriors will use to attack and kill you. There are bats, knives, and oil drums. To defend yourself you can punch or kick that enemy and he will drop his weapon. You also can pick up his dropped weapon by standing over it and pressing the button.

Player one’s score is on the top in blue. Player two’s score is in the middle in orange. And the remaining time is on the bottom in yellow. The amount of time that you have to complete the first two stages is 70 units. For the third and fourth stage it is 90 units.

The scoring in the game is based on punches, kicks, and several other movements and attacks. Your punches being 50 points and your kicks being 100. You also get points for jump kicks, elbows, bat hits, and oil drums strikes.

Navigate your way through 4 missions, City Slums, Industrial Area, Outskirts of the City, and the Enemy Base. You can use corners to your advantage when fighting, but don’t be trapped yourself by using this technique.

Always keep the timer on your mind as you only have those precious units to use to complete each mission or you will lose a life. Some of the missions are quite long, so time is really critical.

When you are ready to submit a world record score for Double Dragon by Activision, check the scoreboard here: https://www.twingalaxies.com/game/double-dragon/atari-2600-vcs