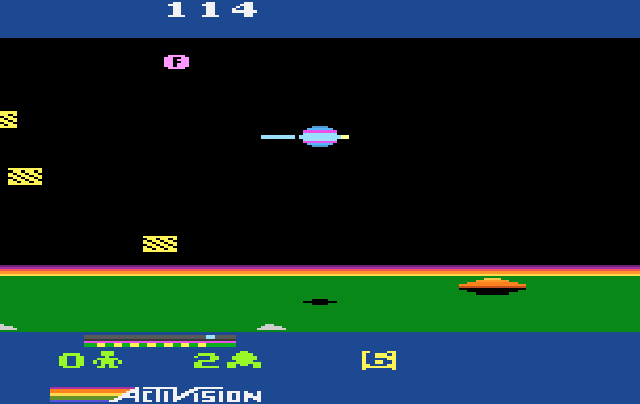 Activision Cosmic Commuter is a side scrolling game reminiscent of Chopper Command or Defender. The game select level is either game one or game two. Two is the more difficult and challenging level that is indicated by the white number at the top of the screen when selecting. When you hit the reset button, it is time to begin and land the first rocket. Shortly after that the cosmic commuter bus will be deployed. If you land too quickly, you will lose a rocket. To land correctly you must be exact. Push forward with the joystick for thrust and pull back on the joystick to reduce the engine speed.

The score is shown at the top of the screen in white. The waiting commuters to be picked up are shown by squares on the rectangular route scanner strip right above the green humanoid icon that is on the far left bottom of the screen. This green humanoid shape also shows how many commuters that you have picked up. There are eight waiting commuters along your way. Next to that in the middle of the screen is the number of landing rockets remaining. The max number of reserve rockets allowed is nine. In the yellow box with the outlined numbers to the right of your extra rockets is your fuel reserve. It always starts at nine and decreases as you fly. If the counter reaches zero, you lose a life. You can gain extra fuel by flying over the pinkish colored “F’s”.

The top segment of the screen which is normally blue will flash red when there is a commuter present to be picked up. If you take too long the commuter will walk away and you won’t be able to pick him up. In order to complete the mission and connect back with the rocket module, you must pick up a minimum of one commuter. Once you’ve done at least that, you will hear a beeping sound. This sound will warn you to fly to the end of the route and dock with the rocket module.

Once you’ve reconnected with the rocket module you then prepare for lift-off. Apply thrust with the engines to blast up into space. You then get bonus points for docking and more bonus points for all the commuters that you’ve picked up along the way.

Next, it’s time to do it all over again. But each progression becomes more and more difficult. You will also gain points for each of the commuters as you pick them up. There are a number of obstacles in your way such as meteors, fireballs, and space mines. But all you have to do is just blast them out of your way and you’ll be rewarded points for doing so. The background color changes with each level progression from black, to blue, to grey and so on.

***TIPS — Keep an eye on the reserve fuel to make sure you don’t run empty. Be mindful of exactly where the commuters are to be picked up. The more commuters you pick up, the larger your end bonus points will be rewarded. Bonus TIP – If you’re still picking up commuters and no fuel pods are visible, just fly to the top of the screen and shoot three obstacles rapidly. A fuel pod will magically appear. Do not fly too fast or recklessly. There is no need to do that. Remember that you are simulating driving a bus in space.

When you are ready to submit a world record score for Cosmic Commuter by Activision, check the scoreboard here: https://www.twingalaxies.com/game/cosmic-commuter/atari-2600-vcs