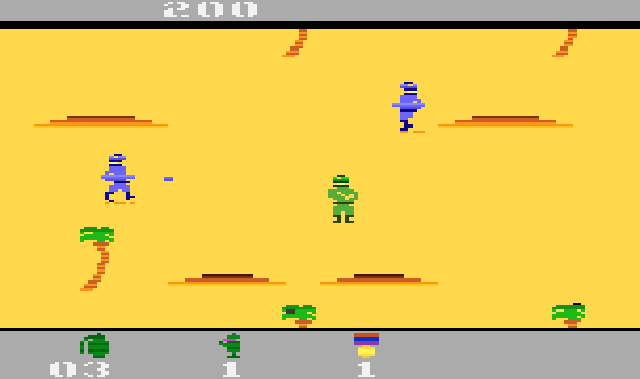 The minimum score required in Commando by Activision for the Atari 2600 to earn a patch was: No patch was ever offered in Commando. The best advice in Commando is to read the manual, so that you know all of the nuances of the game. The manual gives some really good tips. Make sure both difficulty switches are set to B. Activision Commando was designed by Mike Reidel.

Activision Commando is a shoot’em up style of game play. Kill everything or die. The game selection choices are a one or two player game. The score is displayed at the top of the screen. The other resources such as grenades, extra lives, and the current level are shown at the bottom of the screen.

There are two means of attacking; a rapid fire machine gun that shoots in eight different directions and hand grenades. You can choose your shots by aiming in that specific direction and then pressing the button. You start the game with three grenades. You can gain extra grenades each time you collect the double purple rounded squares, when you do this you’ll get four more grenades. Your grenades roll over at 99 in reserve, so be very careful not to accidentally go over 99. You can throw grenades by holding down the button and the grenade will be thrown in the direction that you aimed.

The bright surface colors of the land: “Yellow, Green & Beige” make the blue attacking enemies stand out as easy targets. There are a number of enemies, obstacles, and items that you must navigate through, around, over, or evade. Examples of items in the game are Bridges, Barricades, Grenade Boxes, and Moving Enemy Trucks. The fox holes you must avoid entirely.

There are enemy shooters who are trying to kill you. So be precise in your shots to kill them first to survive through the game. But be careful. If you stay in one spot too long after you’ve killed an enemy, he is replaced right where you killed him with another. Extra lives are awarded every 10,000 points earned. Points are scored by shooting enemies, blowing up trees, and crossing over the grenade boxes.

The game score rolls over at 1 million points, so game play is endless until you’ve exhausted all your reserve men. At the end of each level a mega-fortress is protected by a given number of guards. Once the given amount are killed, the screen will then begin to scroll upward revealing the rest of the fortress. Only then can you gain entrance and go on to the next level.

There are eight levels in total, but once you’ve completed all eight levels, your game will revert back to level one. But that doesn’t mean that the game play will be at the level one skill set. The further you progress the harder, tougher, and faster the game becomes.

** TIPS: Move around a LOT so you won’t become a human target, and don’t be cornered by shots from enemy fire or moving trucks. Skillfully aim your shots, so you’re not hit by the enemy rounds. Grenades can blow up palm trees for LOTS of extra points.

When you are ready to submit a world record score for Commando by Activision, check the scoreboard here: https://www.twingalaxies.com/game/commando/atari-2600-vcs