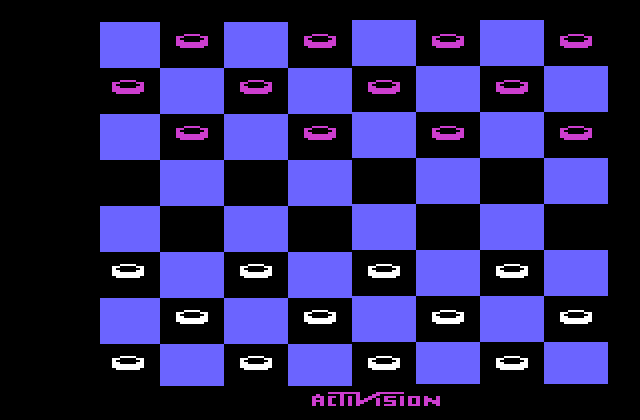 The minimum score required in Checkers by Activision for the Atari 2600 to earn a patch was: No patch was ever offered in Checkers. The best advice in Checkers is to read the manual, so that you know all of the nuances of the game. The manual gives some really good tips. Make sure both difficulty switches are set to B. Activision Checkers was designed by Alan Miller.

Activision Checkers places you in the forefront to be a checker gaming master. There are four gaming selections to choose from. You Vs the computer – novice game play, intermediate game play, and expert game play. Lastly, you can even select to play a real live opponent. Each player uses different sides of the screen. The “left controller” is used to play the bottom of the screen, while the “right controller” is used to play the top of the screen, but only in game 4.

You use the “right difficulty” switch to choose between either red or white pieces. In this game the “left difficulty” has no effect. To begin each game press reset. The color of whose turn it is will be represented by the flashing “X”. When it is your turn to play, you move your joystick diagonally, positioning that flashing “X” over the piece that you would like to move. Once that piece is not blinking you can move it by pressing your button. Movements are always made diagonally and one square at a time. To release your piece just press your button again and your checker will be placed where you chose to release it.

The computer goes by the rules of checkers. You must make a jump if it is available. You cannot choose a different piece if it is not indicated. To make multiple jumps in a row if available you move just like in real checkers. You make your move and put down your piece each time and continue on until all your successive moves are exhausted. You cannot move backward until you have been “kinged” and that is only done by reaching the back line of the opponent’s side.

Once you jump over an opponent’s piece (‘s) they are removed from the playing screen. When it is time for the computer to make its move, the screen will go blank. But do not worry as it is calculating the best possible choices that it can make. At each successive level of difficulty the computer will take more time to determine which is the best possible move for it to make further and further in advance. Example: in game one the computer takes between 5 – 15 seconds to make its move, where in game three it can take up to 4 minutes per move.

Your game ends when both players have only one piece left on the board, which is called a stalemate. Or if only one of the players has one piece or more left, then that player wins. If you play the computer and win, the computer will return the “X” into the upper right corner of the screen.