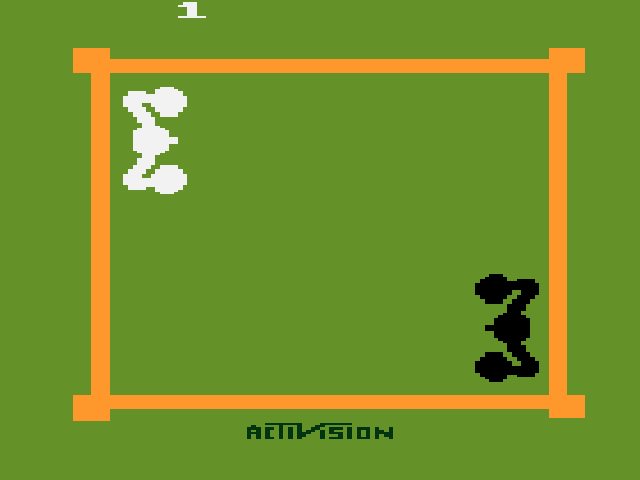 Here is your chance to become the next world boxing champion and Activision offers just that. There are two gaming selections to choose from. “You vs the computer” and “you vs another player”, Those numbers are indicated in the upper left side in white when pressing game select. The controls are up, down, left, and right. The view of the boxers and the ring is from the top downward. The button controls the boxer’s jabs. The difficulty switches control the speed. Difficulty “A” is slower and “B” is normal speed. It is fun to use these settings against the computer by having your difficulty set on “B” and the computers set on “A” it will allow you to move much faster gaining you the advantage, but who wants to win like that. After getting use to the movements, place both difficulty settings to “B” so you can get a better feel of how a real opponents skills will be.

Once you press reset, you’ll have two minutes to perform as many scoring jabs as you can in the round. The scoring is at the top of the screen and these colors correspond with the color of your boxer, either white or black. As the timer ticks down, you try and navigate toward your opponent as fast as possible to knock him out. But beware he is trying to do the same thing to you. You score points on how you jab. For long shots you get one point each, and for close jabs you get two points each. For the knock-out you have to score 100 points. So the first person to reach that score is the winner. Or if no one scores 100 points, whomever is the person with the most points when the timer elapses also wins.

The overhead view offers a unique position to see where and how close you are to your opponent. The realism for its time offered a nice perspective on what it would be like to be a boxer. Plus you can switch sides to confuse your opponent while taking jabs at him, while he is trying to adjust to your attacking position. Circling your opponent in this manner gives you an edge, showing you’re an experienced boxer vs one who’s not.

As you are hit, your boxer’s head pivots back as to look like it just took a shot from your opponent. Trying to trap your opponent between you and the ropes offers an intense way to win the match. By doing this method your opponent has little or no room to move around to avoid being hit.

**TIPS – There is a certain way that you can trap your opponent “player or the computer” between you and the ropes and stick them between jabs. This sticking movement traps them so they cannot move and enables you to gain a faster victory and the points really add up quickly.

When you are ready to submit a world record score for Boxing by Activision, check the scoreboard here: https://www.twingalaxies.com/game/boxing/atari-2600-vcs